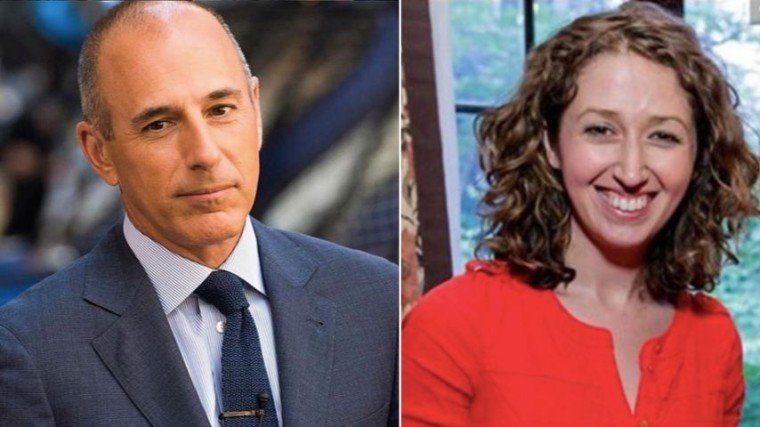 "Today, nearly two years after I was fired by NBC, old stories are being recycled, titillating details are being added, and a dangerous and defamatory new allegation is being made. All are being spread as part of a promotional effort to sell a book.

"The accusation is categorically false, ignores the facts, and defies common sense.

"I attempted to go back to my life and pretend as if nothing had happened. I understand how that must have made her feel.

"However, being upset or having second thoughts does not give anyone the right to make false accusations years later about an affair in which they fully and willingly participated," sey pa ni Lauer.

"At no time during our relationship did Brooke work for me, the Today show, or NBC News. She worked for Meredith Vieira...in a completely different part of the network, and I had no role in reviewing Brooke's work," diin pa ni Lauer.

"There's the Matt Lauer that millions of Americans watched on TV every morning for two decades, and there is the Matt Lauer who this morning attempted to bully a former colleague into silence.

"His open letter was a case study in victim blaming… I am not afraid of him now, regardless of his threats, bullying, and the shaming and predatory tactics I knew he would (and now has) tried to use against me. The shame in this story belongs to him.

"In both of those cases, I asked that my allegations be thoroughly investigated, and that Matt be given the opportunity to defend himself. I provided dates, times, evidence of communications, and corroborating accounts. Both NBC and Farrow found me credible," ayon pa sa official statement ni Nevils.

"I was deeply shocked and saddened by Matt Lauer's letter yesterday in response to Brooke's allegations of sexual assault. The seeming lack of contrition, misstatements, and threatening tone is an attempt to manipulate and control the narrative for his own gain. He is determined to undermine and tarnish the reputation of the brave women who courageously come forward.  This is precisely why so many don't.

"This paragraph is particularly triggering for me and so many others: 'Anyone who knows me will tell you I am a very private person. I had no desire to write this, but I had no choice. The details I have written about here open deep wounds for my family. But they also lead to the truth. For two years, the women with whom I had extramarital relationships have abandoned shared responsibility, and instead, shielded themselves from blame behind false allegations. They have avoided having to look a boyfriend, husband, or a child in the eye and say, 'I cheated.' They have done enormous damage in the process. And I will no longer provide them the shelter of my silence.

"Anyone who knows me will tell you I am a very private person. I had no desire to come out of the shadows from the pain his abuse of power inflicted on me in NBC's newsroom. I never had, nor do I have, anything to gain in telling my truth. In fact, I have everything to lose, but when I realized I was not alone, I was willing to lift the veil on that time to validate the accusations of others. I felt it was the right thing to do.

"I already lived with reporters from the National Enquirer hounding me over the years; I was not going to give them that power again. No one wants to be known for these issues, but after this story broke in Nov 2017, I decided I would no longer provide him the safety of my 17 years of silence, no matter the personal cost (which has been great, evidenced by every comment section under stories of my experience with him). Please do not confuse my willingness to speak up, however, with fearlessness. I'm petrified and humiliated that the world knows the intimate details of this experience.

"That said, here are the facts: I was a single 24-year-old intern-turned-production assistant; he was a married 42-year-old man, the most powerful and successful man at NBC, arguably in all of journalism. The trajectory of my life and career changed drastically as a result of this experience. I have never given false allegations when it comes to this story. To suggest I haven't been honest is a deflection, meant to ruin my credibility and reputation.

"I did look my (now) husband in the eyes and tell him about my participation in what happened all those years ago, and they have been horrible, guilt-ridden conversations. My children had to find out about it when they Googled my name and found words like "slut" and "whore" instead of the philanthropy and military service I proudly pursued in 2002 in addition to my journalism career.

"Mr. Lauer's attempts to slut-shame and rewrite history will not work. It is troubling that he has no understanding of, or empathy for the pain he has inflicted with his brazen and predatory abuse of power on young, vulnerable women who had no voice. But now we do. I have always admitted my part in this - I deeply wish I had been stronger - but he knows it should not have happened. It was wrong - full stop. It cost him his career; his reputation. He will live with that forever. To be sure, so will we. Journalists are tasked with exposing this behavior, not perpetuating it.  Power corrupts and he is not immune.

"I am thankful for the opportunity to move the conversation forward and uncover the truth with assistance from courageous journalists like Ronan Farrow. We rise above our individual experiences and focus on the need to create systemic change through education, training, dialogue and helping the most vulnerable, so that what I experienced, no one will ever have to again."

Following news about the accusations made against Lauer in Farrow's book, NBC News said in a statement: "Matt Lauer's conduct was appalling, horrific and reprehensible, as we said at the time. That's why he was fired within 24 hours of us first learning of the complaint."

NBC News had fired Lauer in 2017 after it received a "detailed complaint from a colleague about inappropriate sexual behavior."

His termination came amid a string of sexual assault accusations made against powerful men in Hollywood and the media, notably disgraced producer Harvey Weinstein.

Lauer has co-anchored the Today show for 20 years and was earning a reported $20 million a year.