Focus | Melizza Jimenez, the girl with many talents 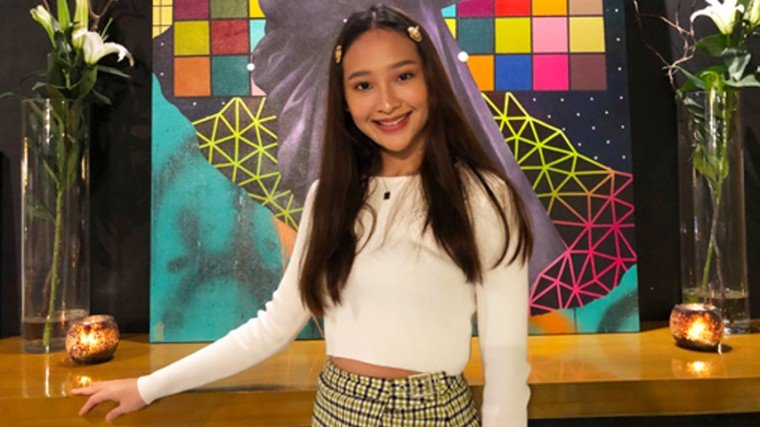 Melizza Jimenez is coming into The Killer Bride as Sonia, a part of a group of kontrabida girls led by Alexa Ilacad. Thus, we ask if she’s ready to be “hated,” and she says: “I’ve experience naman po past bashings, past bullying and it’s fine. We’re gonna show naman po what’s happening off the set. We’re all friends naman po in the set. So, whatever’s on TV won’t dictate what’s in real life.”

Melizza Jimenez, at 19, thinks she’s had enough heartbreaks and rejections. But what’s good about her is that she tries conquering each, instead of letting these setbacks reign over her young life.

Shy by nature, she had to conquer that first because deep inside, she knew she had something to offer.

Her first taste of rejection came when she was in Grade 5, auditioning for the school’s Glee Club.

“Diba sikat po ang Glee  [TV series] noon? While I was auditioning, the person [heading the audition] was looking at me laughing... the nagpa-piano was laughing at me and then out of everyone who auditioned, ako lang ’yong hindi naka-pasok,” Melizza recalls now with a smile.

At age 12, she began enlisting for several kiddie workshops until she became a fanatic of the Pinoy Big Brother  show. She says the show and the “housemates” made her happy for some reason. And that’s when she decided to try her luck and find out if she can be part of the show.

“I wanted to bring the same happiness that they brought me to other people po. So, that’s why I try to audition,” she rationalizes. “So, sabi ko sana po may bata rin pong maging masaya dahil sa akin...that will get inspiration through the hardships that I went through. ’Yon po.”

Still, luck wasn’t on her side.

“Nag-line up po ako sa Araneta [Coliseum] then na-call back po ako for the manager’s audition,” Melizza looks back. “Kasi doon po ’yong mag-audition po ulit ’yong mga na-final call back po from Araneta. Pero maling call time po ’yong binigay sa akin. So I had to go through the process again. And then I went to the final step na kasama ko noon si Ate Kamille (Filoteo of the Pinoy Big Brother 737 in 2015)— if you’re familiar with her, the teen mom?—kasi ’yong audition parang they tell us, ‘Oh, we choose who deserves it more.’ Ako po ’yong pang-second, siya po ’yong first.

“So after no’n, pina-alis na po ’yong iba. So, after no’n I cried to my dad so much kasi I had to go through all of that and then kasi ang dami po naming pinag-daanan... na-interview na ako sa bahay ko gano’n po... There’s a lot of rejections in my life.”

She was told she was too fragile for a reality/challenge show like PBB. Little did she know it was a blessing in disguise.

“That was the time na parang medyo mahinhin pa ako, mahihirapan daw po ako,” she explains. “So what they did to me was they gave me to Mr. M [Johnny Manahan] for the VTR. ’Yong titingnan po ni Mr. M. So, ayon po doon po ako nakuha sa Star Magic.” 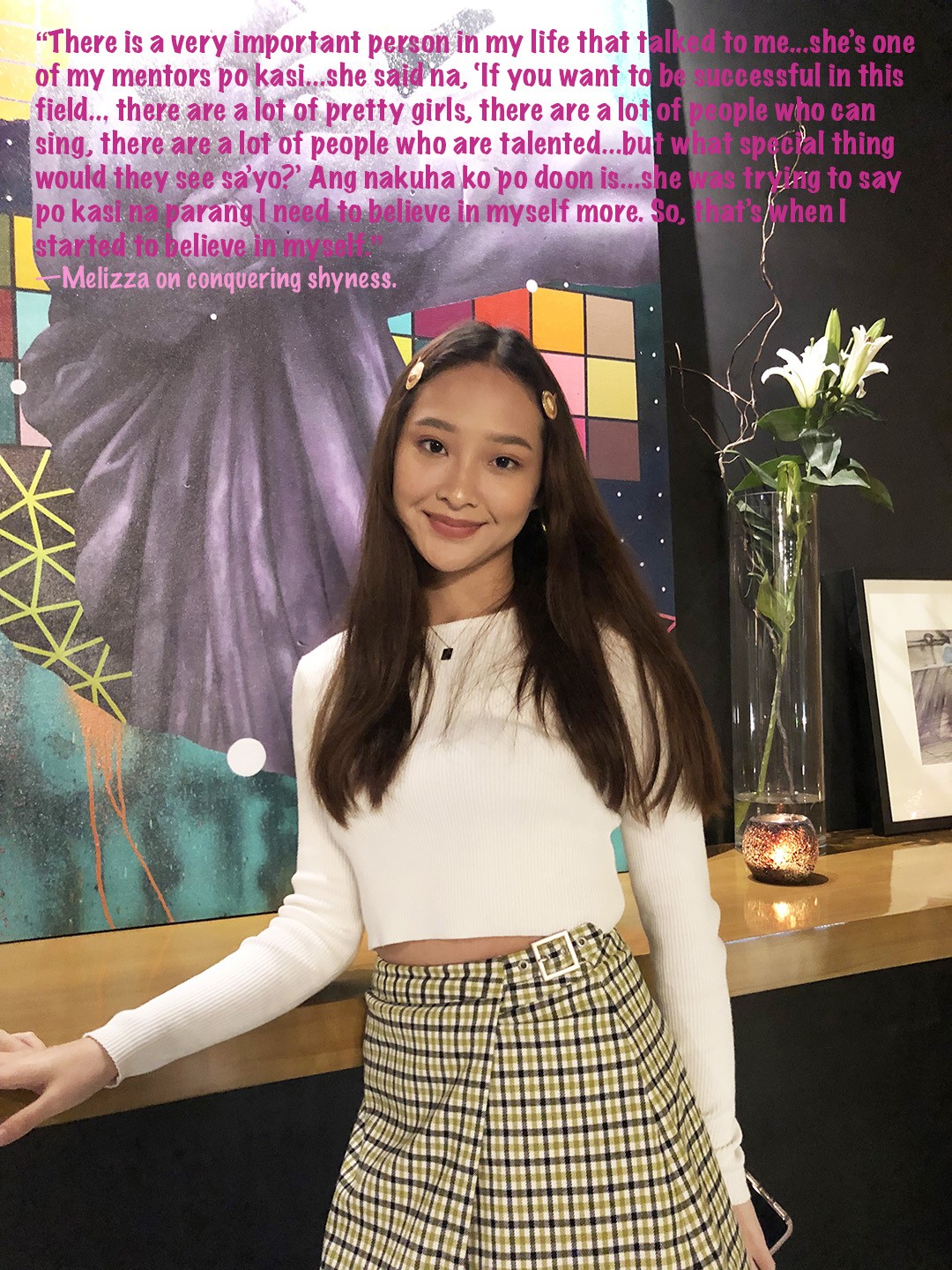 In between that, she was given small roles, both in movies and TV shows, to hone her skills.

Her breakthrough project was with the KathNiel loveteam in the film, Barcelona: A Love Untold in 2016. Then Melizza also took on roles for the top-rater shows Wansapanataym’s Tikboyong and FPJ’s Ang Probinsyano.

Fast forward to today and she’s now part of the much-talked about show, The Killer Bride.

(Las Espadas is the fictional setting of The Killer Bride; while Riverdale is the hit 2017 American teen drama TV series based on the characters of Archie Comics.)

She is also playing as the young Sunshine Cruz in the Regal horror flick, The Heiress with Maricel Soriano and Janella Salvador.

But wait, there’s more. Melizza has also been signed up by Star Music (for its sub-label, Star Pop), for which she will be recording, as a debut single, her very own composition.

Yup, she writes songs, too!

Currently, she has two finished products—the Tagalog one, called “Kung Maibabalik,” was inspired by her best friend that passed on and therefore tackles grief and loss; while the English, called “Kiss Me” was a heartbreak song about a boy that doesn’t love a girl back.

Pikapika.ph was among the privileged ones to get the first dibs in listening to the already arranged songs. And we dare says she has the “K” [karapatan] in both singing ang songwriting. One writer colleague says Melizza sounds like Nora Jones, the American singer-songwriter behind the ultra-hit album, “Come Away With Me.”

But she says her musical influence is Billie Eilish, another multi-platinum American singer-songwriter, who is behind the hits “When The Party’s Over” and “Wish You Were Gay,” among others.

If Melizza—who classifies her music as indie pop—had it her way, she wants the English one to be released first. But she says she trusts the Star Music management.

And she is putting the same trust to Star Magic in matters relating to her acting career. If they deemed to give her a loveteam partner, she doesn’t mind at all.

Asked if she’s ready for the pressures of “loveteam” partnership, she says:

“Lahat naman po ng idols ko nag-go through loveteams like si Ate Kathryn [Bernardo], one of my biggest idols ko si Ate Kath. So I hope I can get through it. I’m preparing myself...working hard po.”

Melizza just finished high school, with honors, at the Colegio de San Agustin in Makati. She made sure she focused on her studies during the time she wasn’t too busy yet as a Star Magic talent.

But currently, she’s a school break. College studies, which is supposed to be in Australia, is put on hold for a while. She said she and her parents had a lengthy discussion of this new concept called “gap year” and they gave in to her request that she give showbiz a bigger attention now.

“They’re supportive naman,” she says of her mom and dad. “Kasi we go through everything together.”

Besides, she says her parents need not worry because she does have plans of getting a diploma someday, either in business, digital media, or communications. But for now, she’s listening to her heart and her heart says she needs to sing and act.