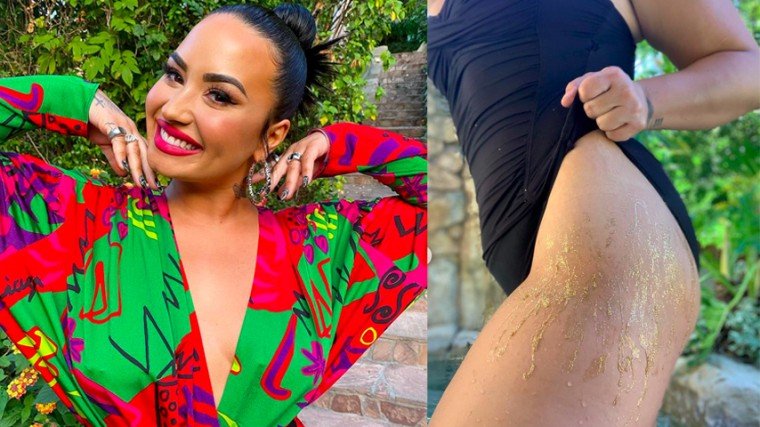 Earlier this year, Demi became open with her eating disorder on Ashley Graham's Pretty Big Deal. "I'm tired of running myself into the ground with workouts and extreme dieting. I thought the past few years was recovery from an eating disorder when it actually was just completely falling into it. "I think when you have certain people around you that are telling you certain things that you should look a certain way, it makes it harder.”

Loving her body is best Christmas gift Demi Lovato has given herself in a long time.

The “Sorry Not Sorry” singer took to Instagram on Christmas Eve (December 24) to share how she has finally learned to love her body and recover from her eating disorder.

The singer even posted close-up photos of her stretch marks, something that she never did before.

"I used to genuinely believe recovery from an eating disorder wasn’t real. That everyone was faking or secretly relapsing behind closed doors. ‘Surely she throws up here and there', 'she can’t POSSIBLY accept her cellulite'... those we’re just a few of the things that I used to tell myself growing up.

"I’m so grateful that I can honestly say for the first time in my life - my dietitian looked at me and said 'This is what eating disorder recovery looks likes.

"This year was tough.. be gentle on yourself if you slip up and remember to get right back on track because you’re WORTH THE MIRACLE OF RECOVERY 💖I LOVE YOU ✨ (last pics without sparkle edits - Instagram vs reality type sh*t you kno? 😝).”

"I'm tired of running myself into the ground with workouts and extreme dieting. I thought the past few years was recovery from an eating disorder when it actually was just completely falling into it.

"I think when you have certain people around you that are telling you certain things that you should look a certain way, it makes it harder.

“I was in that situation, and I was just running myself into the ground. I honestly think that's kind of what led to everything happening over the past year was just me thinking I found recovery when I didn't, and then living this kind of lie and trying to tell the world I was happy with myself when I really wasn't."

The American singer who started her career as a child performer appearing in the show Barney & Friends (2002-2004), rose to become a teen sensation in Disney Channel’s musical film Camp Rock with The Jonas Brothers in 2008 and the sequel, Camp Rock 2: The Final Jam in 2010.

Lovato released six studio albums from 2008 to 2017. Her hit singles includes “Get Back”, “Here We Go Again”, “Remember December”, “Skyscraper”, “Give Your Heart A Break”, “Heart Attack”, “Stone Cold”, and “Sorry Not Sorry”.

In 2017, Billboard reported that Lovato has sold over two million albums and 20 million singles in the United States and was included on the Time 100 annual list in 2017.

Lovato was diagnosed with bipolar disorder, Anorexia nervosa (binge type), self-harm, and suffered being bullied before she went into rehab at age 18. She entered a treatment facility for "physical and emotional issues".

The singer admitted she had used cocaine several times a day and smuggled cocaine onto airplanes.

On July 24, 2018, Lovato was rushed to the Cedars-Sinai Medical Center in Los Angeles after emergency services were called to her home due to an opioid overdose. She was reported to have overdosed on oxycodone laced with fentanyl and was revived with naloxone. She was hospitalized for two weeks and subsequently entered an in-patient rehab facility.

In December 2018, Lovato took to Twitter to dismiss rumors regarding her overdose and went on to thank her fans.

“If I feel like the world needs to know something, I will tell them MYSELF. All my fans need to know is I'm working hard on myself, I'm happy and clean and I'm SO grateful for their support."

A-list Hollywood actors and the Christmas movies they starred in