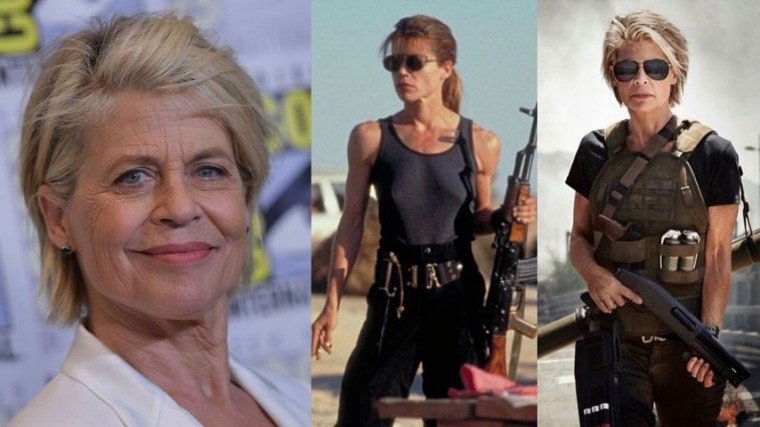 The 63-year old Linda Hamilton originally played the iconic character Sarah Connor in the 1984 cult classic Terminator with Arnold Schwarzenegger. She returned again as Sarah Connor for Terminator 2: Judgment Day in 1994. Both films were directed by her ex-husband, James Cameron. Now, after 28 years, she’s back!

She returned again as Sarah Connor for Terminator 2: Judgment Day in 1994. Both films were directed by her ex-husband, James Cameron.

“Jim and I didn’t not get along, but there was one moment where I’d asked something of him. I wanted to see playback.

"A lot of actors are addicted but I never needed to go and look at my performance to make sure I’d gotten it. Never. Until one day.

“I went nuts! I took him off set but, of course, there’s no ceiling so the entire crew could hear. And I shrieked at him.

“Like, ‘If you want to see a human being on that screen, you better start treating me like a human being!’ I mean, I completely went off.

"When I finished that film, I was like, well, that director is definitely rooting for the machines," tawa pa ni Hamilton.

“You don’t have to look like a guy to be strong. For some reason I won that argument.

"It wasn’t even a vanity thing. And then later on, when she became this icon of strength and you know, the legend of Sarah Connor, I realized that it’s only because I didn’t cut my hair that she became what she did in the minds and hearts of the audience. That was a picture of feminine strength.”

Ni-reveal din ni Hamilton na she never remarried after Cameron and stayed celibate for 15 years during her break from acting.

"I have a very romantic relationship with my world every day and the people who are in it," diin pa niya.

“That was my hesitation: Do I want to trade this lovely, authentic life for that?

"I didn’t want my neighbors looking at me differently.

"We’re neighbors because of who we are, not what we do, and I don’t want that to creep into my life again," tawa pa ni Linda.

In October 2005, Hamilton admitted on the show, Larry King Live that she suffered depression and bipolar disorder which led to violent mood swings and suicidal thoughts.

"It destroyed both my marriages with Bruce Abbott (1982-189) and James Cameron (1997-1999). I eventually received therapy and medication to manage the condition."

Bukod sa Terminator, nakilala rin si Hamilton sa role niya as Catherine Chandler in the 1987 TV series, Beauty And The Beast. She was nominated for two Golden Globes and one Emmy Award.