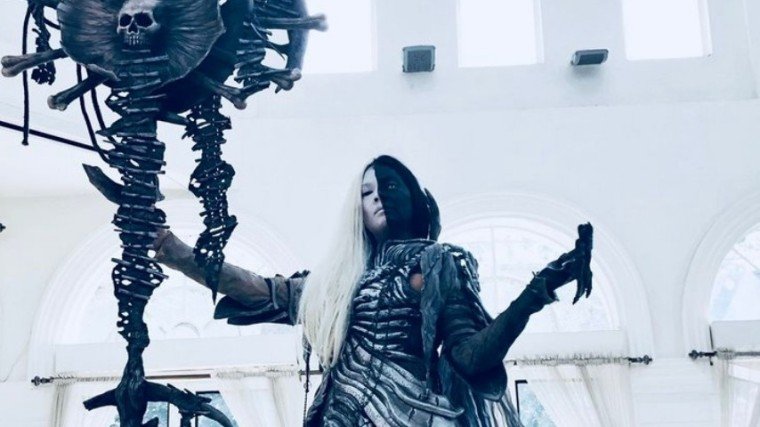 Alden Richards’s Victor Magtanggol may be ending on Friday, but it’s pulling out all the stops for a grand finale.

The show, which constantly trended on Twitter during its 4-month run, unveiled a big twist in its November 13 episode when Victor’s late sister Lynette (played by Chynna Ortaleza) was revived as Hel—the daughter of the show’s villain, Loki (John Estrada).

In Norse mythology, Hel is the equivalent of Hades or Pluto, the god of the underworld who presides over the dead.

For Chynna, this meant doing a complete 180 degree turn from portraying the soft-spoken Lynette and donning an intricate and dark costume for the Hel character.

Chynna showed off her complete look on her Twitter account yesterday, a few minutes before Victor Magtanggol wrapped up its Tuesday episode. The actress wore a ghostly gray dress with skeletal details that evoked a sense of destruction and decay. Completing the chilling costume was a towering sceptre of human bones and stark black-and-white styling for her hair and makeup.

The actress and mom-of-one wrote for her caption: “See you in the afterlife!!! #VMMgaAnakNiLoki.”

Fans of the show praised Chynna for her costume, saying how cool it looked on her. One netizen wrote: “Bakit ang perfect mo Ms Chynna? Is there anything you can't do?”

Excited, more than ever, for the Heroic Finale's remaining episodes!#VMMgaAnakNiLoki

Victor Magtanggol’s last episode will air on November 16. It will be replaced by Cain at Abel, led by Dingdong Dantes and Dennis Trillo.