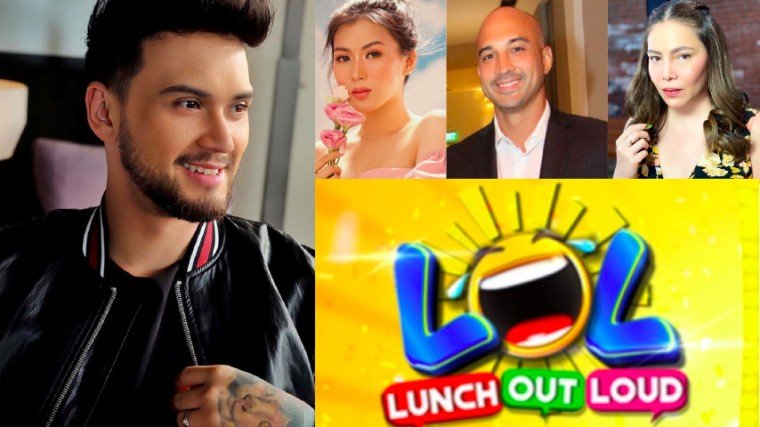 LUNCH OUT LOUD is TV5’s newest noontime variety show. The show which is also known as LOL, will air Monday to Saturdays from 12noon to 2pm.

The variety show features a wide array of fun and exciting games catered for the whole family starting with: 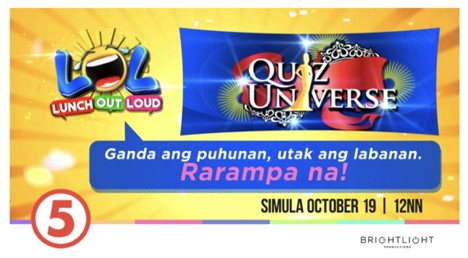 QUIZ UNIVERSE is a segment that pits beautiful women in a small scale beauty pageant with a twist. These women are not only beautiful, they need to be sharp and smart. 3 women who were voted by their schools/baranggays will represent their province in the ultimate beauty pageant!

They will be tested on three rounds: 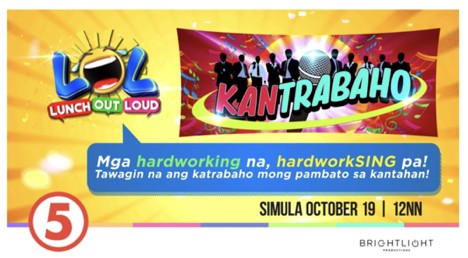 KANTRABAHO showcases just how well Filipinos can truly sing! In our line of work, there is always someone whom we deem as pambato sa kantahan.

Kantrabaho is a singing contest that features a “pambato sa kantahan” in a particular field of work i.e. KaSINGbahay - mga singers na kasambahay.

They will be judged by our Boss-SINGS who eliminate those they deem not worthy of the title. The Boss-SINGS are Ariel Rivera, K Brosas and Wacky Kiray.

They will be seated in revolving chairs and opposite of what THE VOICE judges do, the Boss-Sings will press the button and turn their back on the contestant that they eliminate. Once they press the button, the mic automatically becomes muted. 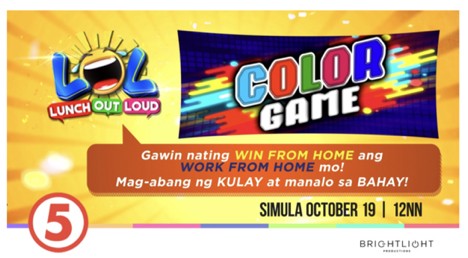 COLOR GAME An interactive game where all 7 hosts will represent different colors. The goal of viewers is to predict the combination of the 7 colors that will come out in the end. For each gap, we reveal a color through a short game ex: a giant slide. Sinong host(color) ang unang makarating sa ibaba ng slide, sya ang color for that gap. At the end of the show, we reveal the 7 color combination.

Viewers can type in their answers to our FB live comment. The first to comment the right answer wins! 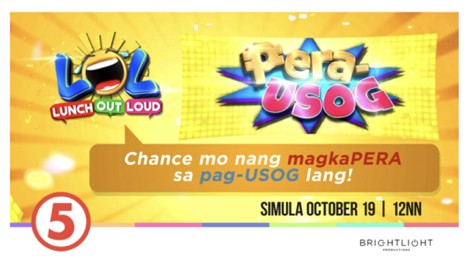 PERA USOG is a tried and tested formula that defines afternoon game shows for the solid TV-watching market: the nanay’s, lolas and Laban o Bawi fans. The game is simple: i-usog ang mga gamit which contains five 0’s and one 1. Viewers get the chance to win up to P100,000 daily! 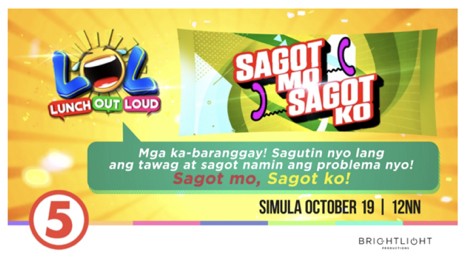 SAGOT MO, SAGOT KO Hosted by new DADDY BILLS CRAWFORD! This fun and easy game starts when the LOL staff go to each baranggay and ask for the citizen’s numbers from baranggay captains. The show will place this in a large tambiolo and Daddy Bills will pick a number and call it.

LOL is a production of BRIGHTLIGHT PRODUCTIONS which is a Blocktime partner for TV5. It is one of the 6 programs Brightlight Productions will be launching this October.

Brightlight Productions is an entertainment company focused on creating thoughtful, engaging and high quality content that appeals to a wide, mainstream audience across television, film and digital platforms. Brightlight aims to fill the clamor of our fellow Filipinos who are looking for fresh television programs, touching and inspiring stories that they surely have been missing for the past six months of this year.

Anyone who knows me well, knows that this is one of my dream jobs. I’m so excited to see what we can do. Even more excited to work with such amazing hosts and producers. Buckle up.. we’re about to take off. #BrightlightproductionsOnTV5 #SoonOnTV5 @brightlightprodph