Team Jolly and Sparkada members take the primetime spotlight via LUV IS: Caught In His Arms 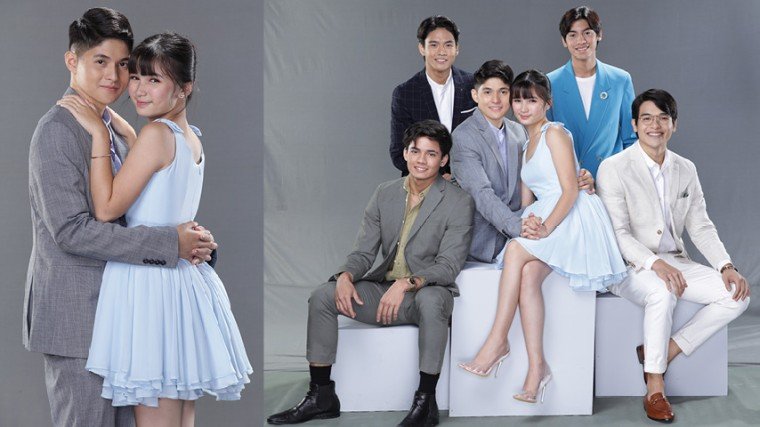 LUV IS: Caught In His Arms follows the story of Florence, a beautiful and bubbly teenager who loves to cook. She was awarded a scholarship from the prestigious Gyronella University. However, she had to set her dreams aside after her father was diagnosed with a heart ailment. Florence looks for a job to make ends meet and fortunately, she gets an opportunity to cook for the Ferells, one of the richest clans in town.

Each night will be filled with love, kilig, and inspiration for the Kapuso viewers as GMA-7 brings to light its first primetime offering for 2023, LUV IS: Caught In His Arms, beginning tonight, January 16.

The program is bannered by the new-gen leading lady Sofia Pablo as Florence and the new-gen leading man Allen Ansay as Nero, together with the Sparkada boys: Michael Sager as Owen, Vince Maristela as Tristan, Raheel Bhyria as Aldus, Sean Lucas as Troy.

Sofia and Allen, or also known as Team Jolly, equally shared how grateful they are to headline their first-ever primetime series.

The Sparkada boys also admitted that they felt the pressure of doing this show, but it made them more motivated to improve their acting skills.

“We want to prove our spot in this industry and this is a big break for us. I prepared by really creating a good relationship with Sofia and Allen kasi it’s my first time to work with them,” Michael shares.

“We didn’t expect to be given such an opportunity at such an early stage of our career. There are moments that we wanted to crumble under the pressure, but since we are all together, they helped us to not give up,” admits Sean.

Playing equally important roles in the series are Sparkada girls, Caitlyn Stave as Antonia, the campus queen bee and Nero's ex-girlfriend; Tanya Ramos as Aira, one of the bullies in Florence's life; Cheska Fausto as Camilla, the adventurous, rich girl who will cause stress to Florence inside the university; Kirsten Gonzales as Lina, a friend of Florence who grew up from a middle-class family until they won the lottery.

Completing the cast are some of the country’s most respected artists in film and television: Ariel Ureta as Lolo Garpidio, the wealthy and affectionate grandfather of the Ferell boys; Audie Gemora as Rogelio, the patriarch of the Almeros and the business rival of Lolo Garpidio; Debraliz Valasote as Serafica, the intimidating yet loyal servant of the Ferells; Bobby Andrews as Lorenzo, the son of Lolo Rogelio who lost his will to live after his wife died and his daughter went missing; Gio Alvarez as Frederico, the sweet and amusing father of Florence; Denise Joaquin as Lydia, the strict but loving mother of Florence; Rain Matienzo as Ash, a close friend of the Ferell boys who will later on become Florence's confidante; Boom Labrusca as Dencio, the driver of the Ferells who treats Florence as his own child.

This highly-anticipated drama is a production of GMA Network in collaboration with Wattpad WEBTOON Studios. Based on the breakthrough web novel of Ventre Canard, it follows the story of Florence, a beautiful and bubbly teenager who loves to cook.

She was awarded a scholarship from the prestigious Gyronella University. However, she had to set her dreams aside after her father was diagnosed with a heart ailment. Florence looks for a job to make ends meet and fortunately, she gets an opportunity to cook for the Ferells, one of the richest clans in town.

In the Ferell mansion, Florence meets the amiable Lolo Garpidio and his five grandsons, Owen, Tristan, Aldus, Troy, and Nero—the most mysterious of them all. Every day seems like a struggle for Florence as the five guys pester and annoy her. But in return, Florence uses her culinary skills to slowly win their hearts, especially Nero who will soon develop feelings for her.

As a reward for her great performance, Lolo Garp permits Florence to study at Gyronella University with the Ferell boys. While navigating college life, she gains a friend in Lina, but she also has to endure the bullying of mean girls, Antonia, Aira, and Camilla.

Little does Florence know that as she juggles romantic, academic, work, and family issues, she is bound to discover the truth about her identity. How will it affect her blossoming relationship with the Ferells? Is there really a chance of love between Florence and Nero?

GMA’s Assistant Vice President for Drama Helen Rose Sese guarantees that the audience will love the young and fresh stars of the series.

On the other hand, Wattpad WEBTOON Studios Development Executive and Creator Manager for International Operations and Strategy Mr. Ryan Benitez highlights their journey with the Kapuso Network.

“We have been working with GMA to find the perfect story to launch this partnership and Caught In His Arms was one of our most-well loved stories. We are so glad that we have partnered with GMA because they understand our vision.”

The show’s director, Barry Gonzalez, details how the cast developed chemistry and camaraderie throughout their lock-in taping.

Catch the world premiere of LUV IS: Caught In His Arms tonight, January 16, and weeknights at 8:50 p.m. on GMA and at 11:30 PM from Monday to Thursday and at 11 PM every Friday on GTV.